Good afternoon to such a distinguished gathering….

I am delighted to be back in Montreuil-sur-Mer, a town of great beauty and distinction which holds many happy memories for me from numerous visits over the years.

I am grateful to MCM for the invitation- in particular to Prof. Bruno Béthouart and to Siobhan Stevens who are the driving forces behind the Committee which ensures that the town’s relatively recent history is properly recognised. I also acknowledge my thanks to Terence Hughes who has provided some photographs on the desk.

This splendid initiative will encourage not only historians, but tourists in general, to visit Montreuil and to enjoy everything it has to offer.

Tonight is a very special occasion as it marks the beginning of a series of events leading up to the commemoration of the setting up of Field Marshal Lord Haig’s General Head Quarters here a century ago in 1916. It is a very important Anglo – French way of celebrating our shared endeavours in times of war- when our joint liberties have been under threat from malign forces.

This particular project – the republication of “GHQ” by “GSO” has a deep personal significance for me as “GSO” was the pseudonym for Sir Frank Fox, my Great Grandfather. (You may know that it was forbidden under Military Regulations for Serving Officers to write under their own name).

Not many people have the privilege of knowing their Great Grandfather – but I did and, as I was 15 years old when he died, I knew him well. I will tell you more of him later and hope that you will see why he was my childhood hero.

But let us go to the start of this project. It was in 2014 that my Parliamentary colleague, fellow Army Officer and friend Lord Astor, wrote to me, as he somehow knew that Frank Fox was my Great Grandfather. (I hadn’t told him, so I lay the blame on the ubiquitous Internet!). He in turn is the Grandson of Lord Haig. Sadly he cannot be here this afternoon as he is hosting a Dinner in London.

Lord Astor had been in discussions in France and in England with Mayor Béthouart, as he then was, to explore various ways of commemorating the centenary of the setting up of the GHQ here. (It is still my hope that the statue of Haig which overlooks the square will be restored by next year.) This would be most appropriate as well as admire the fine statue of Marshal Foch in London.

The support of MCM has made the republication of this unique contemporary account, and tonight’s relaunch possible. I am most grateful to them.

It is they who have had the major task of translating the whole book into French.
I would also like to record the marvellous help of my son Edward who has been responsible for the design and layout of the English version, which also includes statistics produced for King George V never before generally published. (By the way the Beaumont name under which it is published is a reference to the small amount of French blood in my veins!)
His work under difficult conditions has been invaluable. It has also become a labour of love for him as he is proud of his ancestor, and I am delighted that he has been able to come here from South America to be with us today.

Frank Fox was a War Correspondent for the Morning Post, a distinguished British newspaper which is now part of the Daily Telegraph.

His first experience of battle was in the Balkan Wars in Bulgaria from which he was summoned to go to Belgium in the light of an anticipated German attack.

He was attached to the Belgian Army in time for King Albert’s rejection of the German Ultimatum. From August until December of 1914 he criss-crossed the country – often by bicycle to avoid attention- where he witnessed atrocities visited upon the civilian population, the use of human shields, and the sacking of the cultural centre of Louvain and of numerous churches and historic buildings.

So horrified was he by all of this, that he longed to become a combatant. Thus he returned to England and was commissioned into the British Army. He was 41 years old at the time-beyond the limit for military service- and I suspect that he lied about his age!

He was sent to the Somme where he was twice wounded. On the second occasion his diary recorded “I was blown up in front of Le Sars. I refused to die on the battlefield. The gallant stretcher bearers got me in. I spent the next year in hospital. ”

Although he worked for MI7 (Propaganda) during his convalescence – mainly in attempts to get the USA to enter the War- he fretted to get back to France.

Owing to various political and personal contacts he succeeded in this and arrived here in GHQ, Montreuil as a Staff Officer in the Quartermaster General’s Department.

He must have cut a curious figure on crutches having lost most of his right foot, and with his withered left arm in a sling. His profound deafness cannot have added to the general impression that he gave!

Some Staff Officers were criticised for being “desk warriors” far from the Front. At least he was immune from such remarks- and it seems from his account that many Officers were “crocked” having “taken a knock”. Fox was glad to undergo regular physiotherapy for his wounds at the hospital.

But enough of him for the moment. What did he record of life here in GHQ from 1916- 1919 when Montreuil was at the hub of the most extraordinary planning and logistical exercise leading up to the final defeat of the German Army?

I hope that – in French or in English, both versions of which are available here this afternoon- you will read for yourselves.

However, I will pick out a few points.

Montreuil was selected for its all important role owing to its accessibility both to the Trenches and to Paris and London. GHQ was moved there from St Omer in March 1916. The British Expeditionary Force (BEF) with its Commander in Chief could thus communicate with ease with the Secretary of State for War and the Government in London.

Fox describes its attributes as “central remoteness”. There was a military population of about 5,000 including 300 Regular Officers supplemented by Temporary Officers- referred to irreverently by some as “Temporary Gentlemen”!

He says that it was ” a fantastic life- serious, monkish (in the almost total absence of the female sex), sober, disciplined and exciting.” Typical hours worked were 0900-2230 hrs with no distinction for weekends. Leave was given every 6 months.

He says that this depiction is in contrast to “lurid accounts of imaginative writers”! He also has a swipe at Members of the British Parliament who treated visits as “Cook’s Tours” -Cook’s being a well-known tourist agency.
General Travers Clarke, the QMG under whom Fox served, was insistent that Staff work should be seamless between the office and the trenches.

Five British Divisions were deployed – each at 20,000 men larger than the standard. Perhaps the most significant statistic is that for every Rifleman or Gunner in the Front Line, there were 3 soldiers in support.

I say “British” but let us not forget that this included men from throughout the British Empire – let alone relatively unsung soldiers from France (of course), Belgium, USA and Portugal -an early and truly international HQ.

The CinC lived in a nearby chateau and the École Militaire housed the HQ. There was a pleasant walk along the Ramparts to the Officers’ Club.

There is reference to Marshal Ney’s house near Plas Verte (used for Napoleon’s planned invasion of England) and to the Hotel de France which served as an alternative to the Officers’ Mess. Fox was billeted with a Monsieur Laurent and I wonder if any of his relations still live here. Can anyone help? His wife was a French teacher – and I fear that I would have benefitted from her tuition!

So what were the headline functions of GHQ?

The link between the Army in the field and the political leaders of the Allies; strategy in the British sector; supply of all clothing, food, munitions and pay; transport (by road by horse and by motor; by rail and water); agriculture and food supply; medical, veterinary and spiritual support etc. – all vital for maintaining morale (although it was noted that GHQ officers were poor church goers in contrast to the very religious Haig!)

There was occasional recreation in the Theatre, and in cricket, football, swimming and riding- which Fox particularly enjoyed. Indeed he took a special interest in the welfare of the many horses deployed at the Front.

Whilst British soldiers were described as “lions in the trenches” he maintains that they behaved as “lambs in the villages”. The relationship between the Army and the civilian population was a crucial one, being the unusual state of a country being occupied by friendly forces. This required civilian assent and cooperation, which was complicated by the movement of refugees.

New insights are given into the importance of a Labour Corps of up to a third of a million men.

I will not go into the descriptions of the waxing and waning of the campaign all of which you can read.

Haig’s reputation has become a controversial subject. However in this contemporary record he has been given fulsome praise for his faithfulness to friends despite political or Press criticism; his brilliant insight for Appointments; his religious convictions; his great trust in others; and his enlightened promotion of education of soldiers to prepare them as better citizens for the return to civvy street after such extraordinary and exceptional experiences in battle.

The book ends with Marshal Foch’s appointment as Commander in Chief of the Allied Armies- a move which was wholeheartedly supported by the British and American Generals- Haig and Pershing.

That highly appropriate international recognition of French suffering and courage leading up to the glorious end to the War is also a good point on which to conclude this talk.

Thank you all for coming. 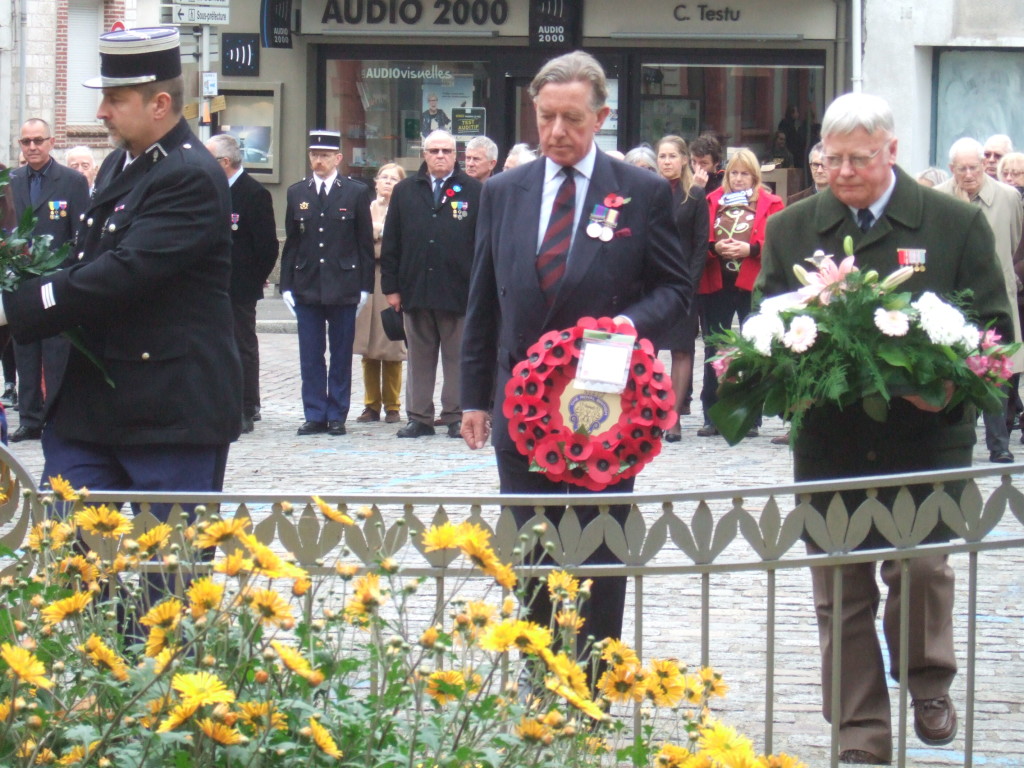