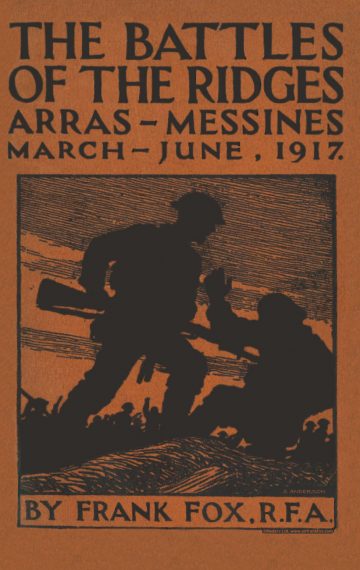 This book was written when the author, Frank Fox, was convalescing in England having been seriously wounded in the Battle of the Somme in 1916.

During this time he was employed by MI 17 (Military Propaganda) as part of the effort to educate and persuade the American public to support the United States joining the War effort in France, the U.S. having declared War on April 3rd, 1917.

A companion volume with a similar purpose was ” The British Army at War”.

The Allies won significant victories at Arras and Vimy Ridge on April 9th,1917, followed by the Battle of Messines on June 7th.

US troops under General Pershing duly arrived in France on June 27th of that year in the final push leading up to the German surrender on Armistice Day , November 11th., 1918.

Despite his formidable disabilities, Fox engineered a return to France to serve on General Haig’s Staff in at Montreuil- sur- Mer. He wrote an account of the planning for final victory in “GHQ”, now republished.

Subsequently he accompanied King George V and Haig to the openings of the Military Cemeteries in Belgium and France. He wrote an account of this in “The King’s Pilgrimage” – also now republished.