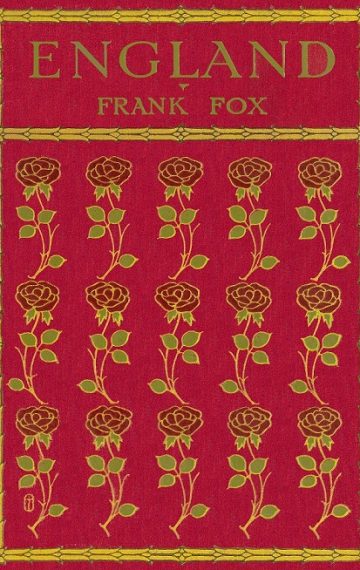 First published in 1914, this wonderful book by Sir Frank Fox evokes the beauty of England and her customs. Republished one hundred years later by Beaumont Fox (the imprint of his great grandson Dr.Charles Goodson-Wickes). He warns of the threats to the countryside which are just as topical over a century later.

Frank Fox arrived in England from Australia in 1909. He was not uninformed about the country in which he was to spend all of his fairly long life. He had always been a voracious reader and had obtained many useful introductions beforehand. Indeed he spent his first night in England in All Souls, Oxford. Moreover his Father had been born in Kent.
That said, a “visitor from one of the overseas Dominions” was well placed to admire and describe the charms of rural England which many inhabitants might be inclined to take for granted.

Fox as an Imperialist often puts the landscape into an historical context. His prose is an eloquent reflection of the beauty he observes- as evidenced by his description of hedges:

“The hedges, which take up a considerable fraction of English arable soil, help to the park-like appearance of the country. They are inexpressibly beautiful when spring wakes them up to pipe their roulades in tender green. In summer they are splendid in blazon of leaf and flower. In autumn they flaunt banners of gold and red and brown. In winter, too, they are still beautiful, especially in the early winter when there still survive a few scarlet berries to glow and crackle and almost burn in the frost. If England, in a mood of thrift, swept away her hedges and put in their places fences (or that nice sense of keeping boundaries which enables the French cultivator to do without either), the saving of land would be enormous. But much of the park-like beauty of the country-side would depart; and with it the predominant note of the English landscape, which is that of the estate of a rich, careful, orderly nobleman.”

Reports of his extensive travels are enhanced by evocative illustrations throughout.